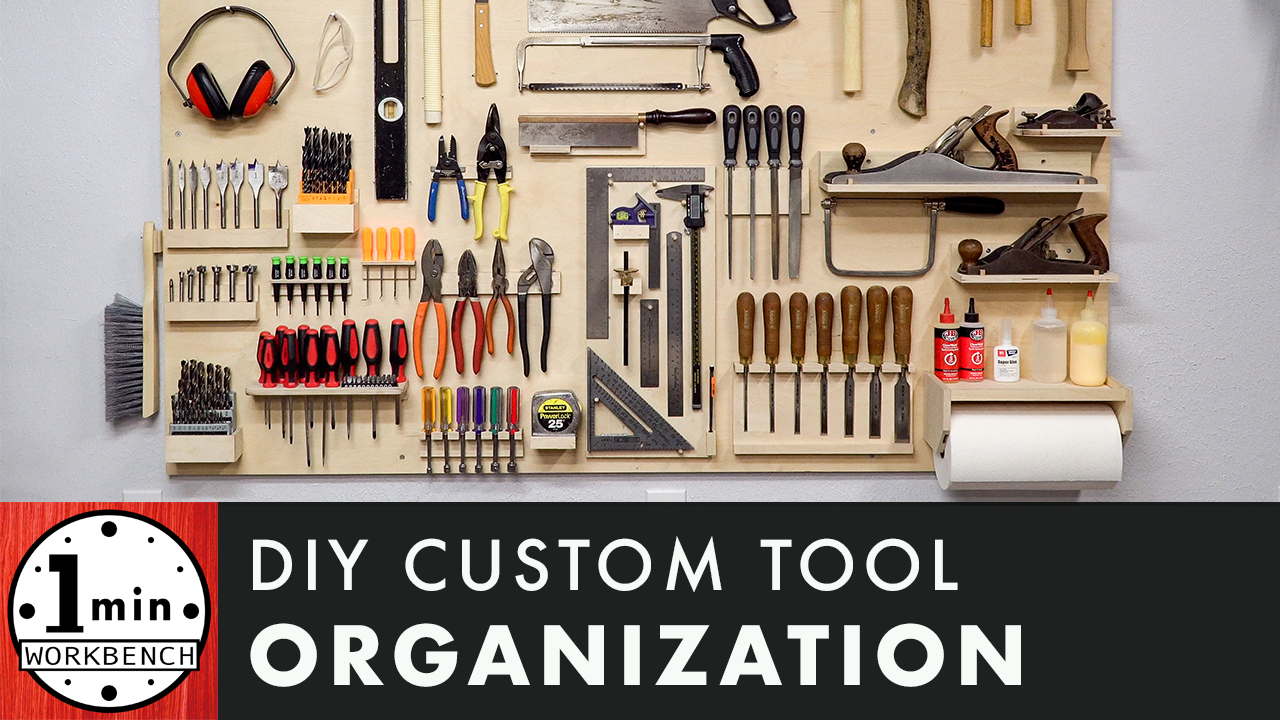 People either love it or hate it. Well, maybe that’s not 100% fair. Most people love it. Some people are so die-hard about French cleats that they hate anything that isn’t a French cleat system. Some people are French cleat aficionados that can still appreciate the benefits this wall provides, while saying that they’ll stick with French cleats. One thing that seems to be universally true among all these people is that they all pretty much agree that pegboards are the worst! Sorry if you’re one of the few people that prefers a pegboard ?

In fairness to pegboards, they’re a lot better than not having any quick access tool storage system at all. That said, I think French cleats are a major step up from a pegboard. Now, I know I’m going to get in trouble with the French Cleat Mafia for this next one, but….I think my tool board is BETTER than French cleats. There, I said it! So if you’re one of those French cleat people that thinks it is a better system than anything else out there, allow me to try to explain the added benefits of my system, and at the same time try to overcome some misconceptions about it.

One benefit is building the holders. With French cleats, you not only have to build custom holders, but you also have to build in the ability for them to hang on the wall. With my system, I build a custom holder and then just nail it to the wall anywhere I want – no special hanging apparatus necessary.

Another benefit for my system over French cleats is simplicity. It only requires a single flat surface, instead of the bulky, dust-collecting slots on a French cleat wall. Not only does this make it easier to build, but it’s also cheaper to build. Since there are no slots to collect dust, it’s also easier to maintain.

You say “Okay, Tommy, but what happens when you buy a new tool and need to rearrange them?”, and you think this is where you’re going to prove to me that French cleats are better. Well, this is actually the biggest misconception about my tool wall. People think that because the holders are nailed to the wall, that they’re more difficult to move than French cleat style holders. In reality, the pin nails I use to secure these (and the way I use them, which is firing them at opposing angles) holds all the weight necessary and more, but with a good firm yank, they come right off. I did include an example of this in the video, but people must not be watching that part, because they always cite being able to rearrange the tools as a flaw with my design.

So the benefits of rearranging the tools on my wall doesn’t just stop at being able to pop them off the wall easily. Again, this is another area where I’d argue that it’s better than French cleats. With French cleats the wall is not infinitely rearrangeable within its border. Instead you have to stick to the cleat slots. So French cleats suffer from one of the same problems that pegboards do, and that is that you are confined to the predetermined hanging areas. With pegboards, it’s their holes. With French cleats, it’s their slots. With a tool wall like mine, you can rearrange them any which way you desire. Tools are unusual shapes, so having the ability to put them anywhere within the border means you can achieve much more efficient use of the same space. This is because you can “Tetris” them into that efficient arrangement.

So there you have it, my reasons for doing this instead of French cleats. As always with the One Minute Workbench mindset, I wanted something that was as simple, cheap, easy, and efficient as possible, all without sacrificing performance. I think it’s a pretty darn good system for no more than the price of some plywood and screws ? I know the die-hard French cleat fans won’t have it, and will insist that cleats are better….and that’s okay! So if you’re in that population, don’t worry; I’ve got nothing but love for you! There’s not always one solution that works best for everyone, and I’ll be the first to admit that you’ve gotta do what makes sense to you. After all, as they say, variety is the spice of life! If you’ve got any ideas that you think are better than either method, I’d love to hear it – just send me an email!