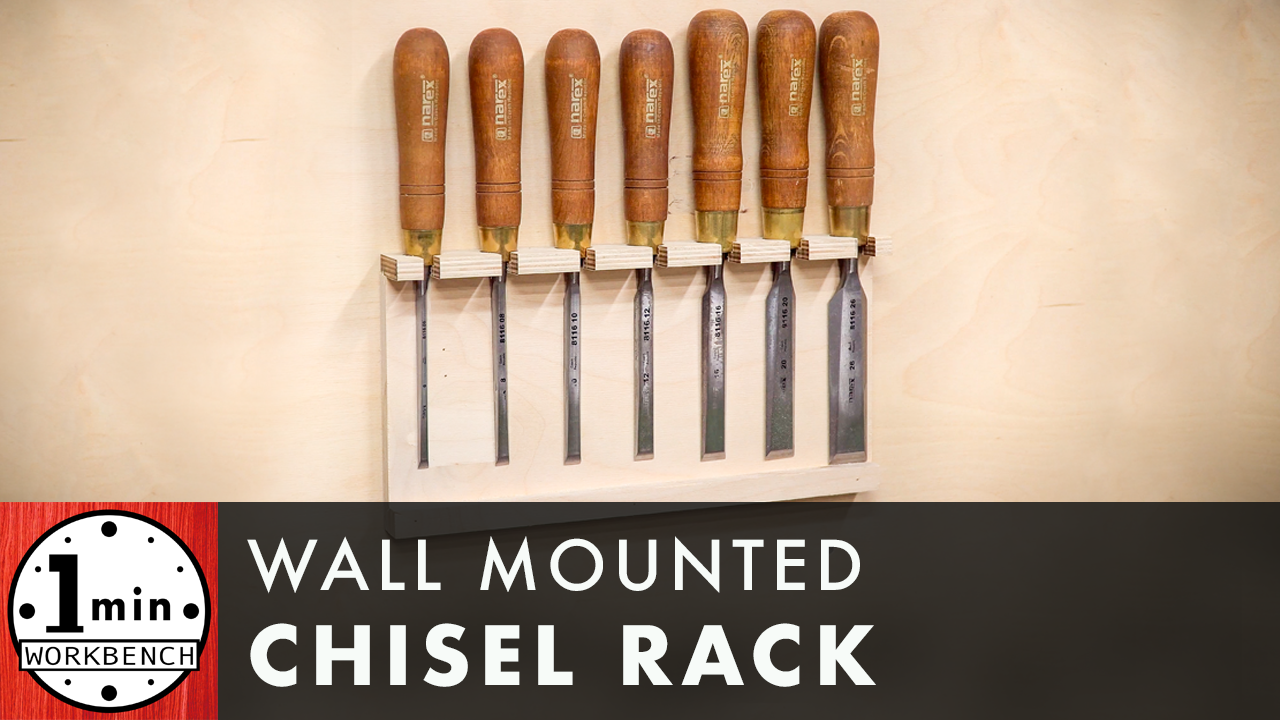 I have a confession to make. Before I built this chisel rack, I had my chisels in my workbench drawer. When I shot video of the drawer, I always carefully organized them so they looked good on video. In reality, they were a mess. Every time I opened or closed the drawer, they would roll, get jumbled, and be out of order. They would also mingle with all the other tools in there. I know….it’s embarrassing.

So this isn’t exactly a mind-blowing project, but it has made a huge difference in my shop, and in how I feel about my chisels. Even though they were tucked away in a drawer, just knowing that they weren’t in order, and possible even becoming damaged by rolling around with other tools, always caused some anxiety. And a feeling of guilt that I wasn’t taking proper care of my tools. Tools are expensive, and deserve being taken care of! I considered building an in-drawer solution, but since I was working on the tool board anyway, and because I use my chisels very often, I decided to add them to the board.

The thing that sets this holder apart from the other ones I’ve seen is that it protects you from being cut on the tips, while simultaneously holding each chisel in a position where its size can be seen. In fact, most of the ones I’ve seen out there online allow the chisel to turn freely in the holder, which means unless you purposefully think to straighten each chisel out every time you put it away, you won’t be able to see which is which next time you need to use them. So you’ll wind up having to fish around to find the one you want. This holder instead forces you to place the chisel in just the right position as you put it away, which means you’ll be able to see if you’re grabbing for a 3/4″ versus a 1/2″, etc.

As I’ve mentioned just briefly, the chisel holder protects you from the tips of your chisels. I keep my chisels RAZOR sharp. I can literally shave the hairs off my arm with my chisels, and in fact, that is my test to see if I’ve sharpened it enough. If it doesn’t shave, I keep at it until I get it there. All that said, serious injury with these chisels is a real possibility. Most of the chisel holders I found online, especially wall mounted ones, had no built in safety feature. They all just allow the chisels to hang down haphazardly. Imagine reaching up to grab something off the board and catching the back of your hand on one of these razor sharp bad boys! Yikes!

At first, I pictured a box that would conceal the tips, but then I realized that I wouldn’t be able to see which chisel I was reaching for. So with that design, I would still have one of the main problems that other wall mounted holders have. That’s when I came up wit the idea to seat them so that they were close enough to the back wall of the holder that it would be near impossible to strike the tips. Then adding the small strip at the bottom just further made it unlikely that you could accidentally make contact with the tips. The only challenge was getting them that close, and having them stay upright, balanced, and secure. The video does a better job of showing how I managed that part of it, so if you haven’t seen it yet, be sure to check it out!