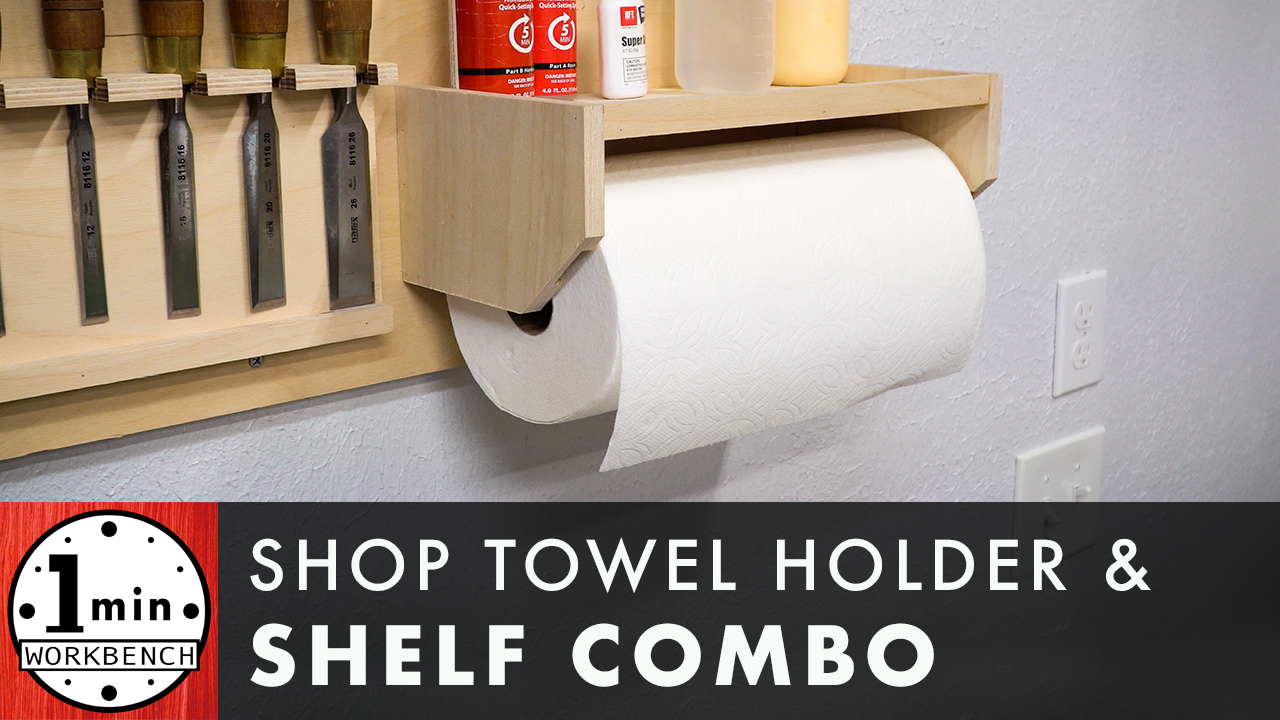 This is one of the simplest things I’ve made for the shop, and one of my most favorite things to date. I’ve always kept paper towels in the shop, but I’ve just had the roll free floating. That’s been okay, but this is much better. The problem with the free-floating roll is that I have to look around to find it, and then when I need a paper towel, I have to find a way to hold the roll while I tear one off. Many times though, I have one hand that is occupied with what I’m trying to wipe in the first place (like glue, paint, etc. on my hand). So I always ended up having to try to tear a towel off one-handed, and many times that resulted in the roll rolling across the shop floor…sometimes unrolling itself.

[Get the Free Plans]

So what I’m describing isn’t exactly a new concept. Obviously, almost everyone has a paper towel holder in their kitchen, for all of the same reasons I just described. It gives you a single place to know where the towels are, and stabilizes it for you so you can more easily operate it with one hand. That said, I could have just bought one off the shelf, but as I mentioned in the video, paper towel holders that are cheap don’t have a nice shelf built into them. And ones that have a shelf built into them (even the ones with a pretty bad/weak shelf) are surprisingly expensive.

The other side of this coin is that I never found one that had exactly the type of shelf I wanted. I wanted a large shelf that takes advantage of the fact that it has to hold a paper towel roll. A lot of the ones I saw when shopping online had a shelf that was smaller than the overall footprint of the paper towel roll. What’s the point in that?! I mean, if you have to take up that much space for the roll anyway, you might as well make the shelf that large, right? Finally, I wanted a small lip to help reduce the chance of things sliding off, and most of the ones I saw didn’t have what I would consider an effective lip, or at least not an effective “lip-to-shelf” ratio.

The thing I love most about the shelf is that it gives me a place to keep a small squeeze bottle full of water, close to the paper towels. Since I don’t have sink in the shop, this has become my go-to arrangement for glue squeeze-out clean up. I take a paper towel, fold it over twice, squirt some water on it, and then set that on my workbench. Then anytime I get glue on my fingers and don’t want to smear the glue all over my workpiece, I simply give them a quick wipe on the wet paper towel. The water makes it stick to the workbench top so as I drag my fingers across it, it stays put. Obviously, the water also helps wipe the glue away. Since this method requires very little water, I only every have to fill my water bottle once every week or so. So not only has this method simplified my glue clean-up experience, but it actually saves water compared to rinsing my hands in a sink.

Based on the popularity of this design (it gets downloaded…A LOT), it seems like I wasn’t the only one looking for something like this. If you have any ideas for improvements or just want to share your thoughts on this design, feel free to send me an email, or let me know in the YouTube comments for the video! Happy building, Everybody! Let’s keep it clean!