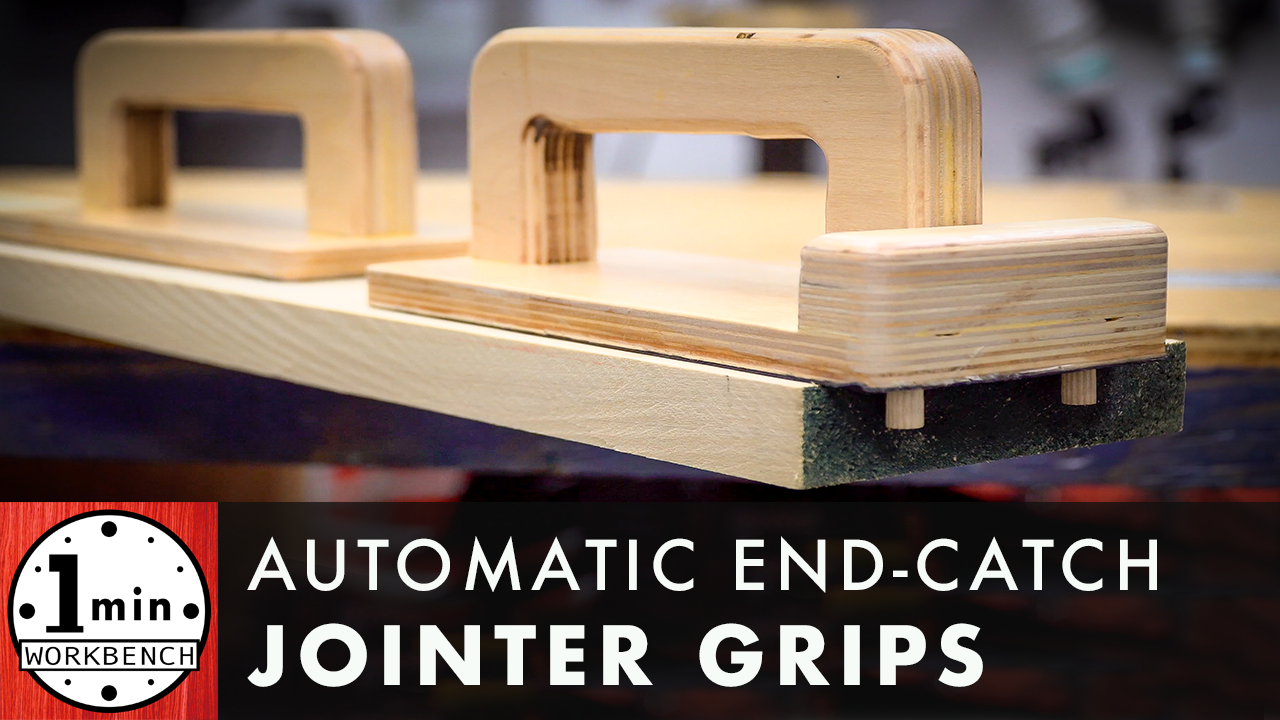 When I first got my jointer, I was pretty impressed with the pads that came with it, especially for the price. When I made the video review for the jointer, I indicated that I’d probably make my own push blocks for it at some point. As time went on, I found the grips very reliable, and never really wanted to take the time to make something more substantial because they were actually pretty darn good – for most cuts.

Fast-forward a couple of years and lots of boards jointed later, and I received a comment from a viewer saying that one of my techniques for jointing boards was out-dated. He noticed that as I passed a board over the cutter-head, I had my hands placed flat on the face. When I learned to use a jointer, I learned that this was acceptable because the thickness of the board protected my hands from the blades. That viewer let me know that even though that’s the way it was taught, it had over the years become known as something that wasn’t as safe as possible because the cutter-head could catch a knot or something else in the wood and project it backwards. In that case, it could so happen that your hands would remain over the blades as the board was thrown out, and your hands could then be injured. I did a little bit of reading, and as it turns out, this has happened. Yikes!

So why not just use the push grips that came with the jointer, and abandon the “hands-on-the-board” technique? Well, this goes back to the original push grips being pretty darn good….for most cuts. It turns out that when face-cutting a larger board, the rubber grippy surface of the stock push grips can sometimes start to slip. Which is why I used my hands for cuts like that in the first place; my hands have better grip than the rubber sponge on the bottom of the stock grips.

So when I set out to make these grips, the first thing I wanted to do was use something that provided more grip than the rubber sponge on the stock grips. I performed a bunch of tests with materials I had available in the shop to see what worked best, and (at least from the stuff I had on hand), the bicycle inner-tube worked the best. Next, I thought about other weak points in the design of the stock grips. I realized that near the end of a cut, especially on longer boards, the downward pressure had to be increased in order to keep the board flat as it goes over the cutter-head. This means two things: #1, there is less force being applied in a forward motion to complete the cut, and #2, there is more friction between the board and the tables. So it’s a double-whammy! Not only do you have less power to push the board through, but it’s also harder to push it through because of the increased friction.

If you’ve seen the video, the answer is now obvious. The drop-down pegs make it to were you are able to apply much more forward-directed force than you ever could with just the grippy surface of the grips. Before, it was always a contest between the tables’ friction and the rear-directed force of the blades, and the friction of the grippy surface and the forward force it was capable of transferring. With the pegs behind the board, you have a solid object pushing the board forward. So you can press down as hard as you need to to keep the board flat as you finish the cut, and at the same time, rest assured that you enough oomph to push the board through without having to rely on friction alone to do the job.

And the last part of this design was to make sure the drop-down pegs would not damage the cutter-head or increase the likelihood of an injury. So, it would have been much easier to use bolts in the drop down slots, but if they ever come in contact with the blades, it would be catastrophic for the blades, and dangerous for the user. So while it is a little more trouble to make the pegs, they are well-worth the effort! Anyway, I hope enjoyed this article – REMEMBER TO BE SAFE OUT THERE!