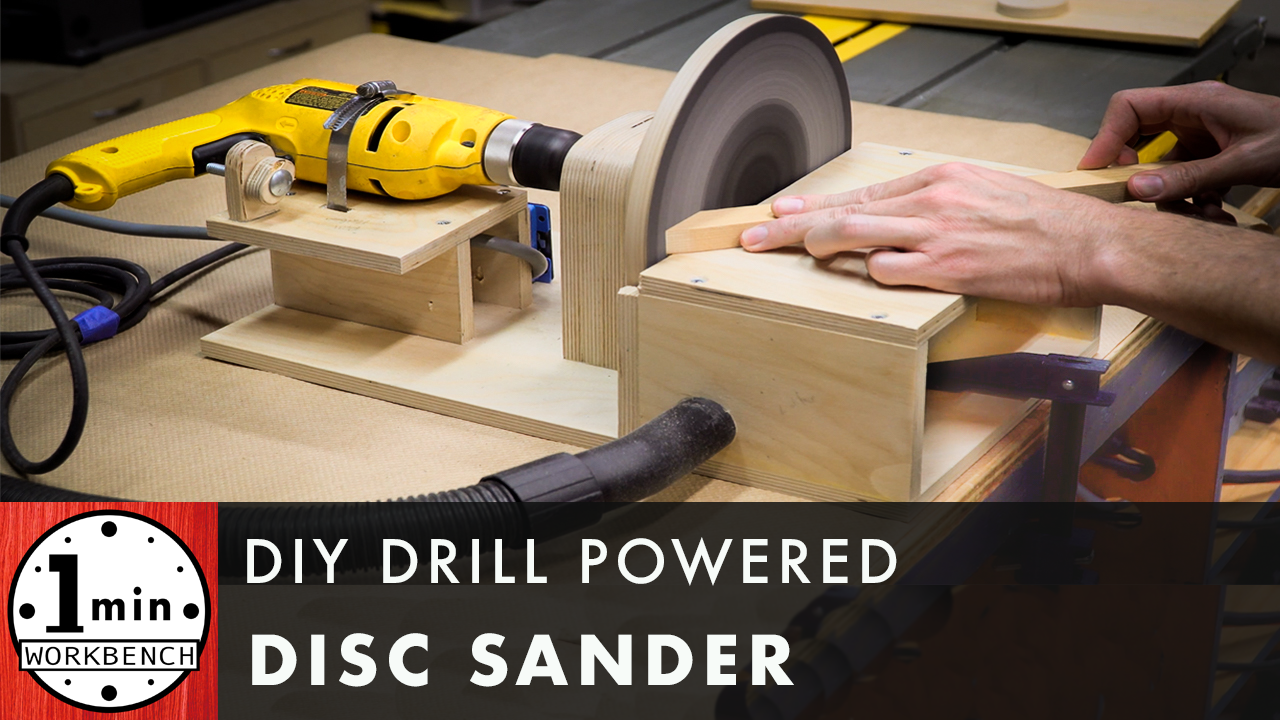 Okay, so this was a tough build. I take that back – the build was easy! The hard part was getting the design right. I saw a lot of designs on the internet for drill powered disc sanders, even some on YouTube, but I’m going to go out on a limb here and guess that most of those designs failed shortly after they posted the video.

How can I be so sure? Because I tried and tested designs similar to everything I’ve seen, and all of them failed after 10-20 minutes or so of use.

Which is why I’ve been at this project for over a month now – I didn’t feel right about posting a video of something that was only going to last 10 minutes.

I tried a bolt/threaded rod as the spindle (I’m sure you’ve seen a similar video), which by the way created way too much wobble, and was not comfortable to use. You’ve probably seen YouTube videos of people using wobbly sanders. From the video, it might not look like that big of deal, but trust me – it is. I tried truing the face with a chisel with only mediocre results. Because the spindle can’t be set at 90 degrees to the disc, truing the disc is like spitting in the wind.

I tried to use hex nuts or bolt heads that fit into a shape that has been chiseled out in one plate while another plate with a counterbore covers it (I’m sure you’ve seen a similar video on YouTube). It failed very quickly. The head of the bolt/hex nut would tear through the wood after using it for a short time.

I tried reinforcing things with 5 min epoxy. That also failed…just a took a little bit longer. I tried using marine grade epoxy. In fairness, it held up for more than 20 minutes, but eventually shattered during light use because it was too brittle, too “glass-like”.

In the end, I’ve performed over 5 epoxy tests, built 3 sanders, and have made 5 disc designs for the last iteration of the sander.

So what’s the disc and joint design that’s currently winning? A non-threaded 5/16 plain steel rod, and old school JB Weld. Original formula. The non-threaded rod is a much better fit for the bearings, and using the method I did, I was able to get it dead straight at 90 degrees to the disc. Not only was I able to get it straight, I was able to easily repeat my success – every disc I’ve built since coming up with this method has been easy to set at 90 degrees to the spindle. And the JB weld is as hard as marine grade epoxy, but not as brittle. You can watch the video here to see how I implemented it.

And how is it holding up? I sanded a large piece of southern yellow pine today for 40 minutes straight, turning the machine on and off at random times to simulate using it in real world conditions where the spindle/epoxy joint will be under start and stop torque conditions. I sanded for intervals upwards of 10 minutes straight, would flip it off, flip it on, and go right back to sanding. After all that, I turned it on and off 110 times, letting it come to a full stop between so that it had to suffer maximum torque at start-up. The spindle and disc have zero play. I’m pretty happy! If you want to be happy with one of these too, you can buy the plans here!