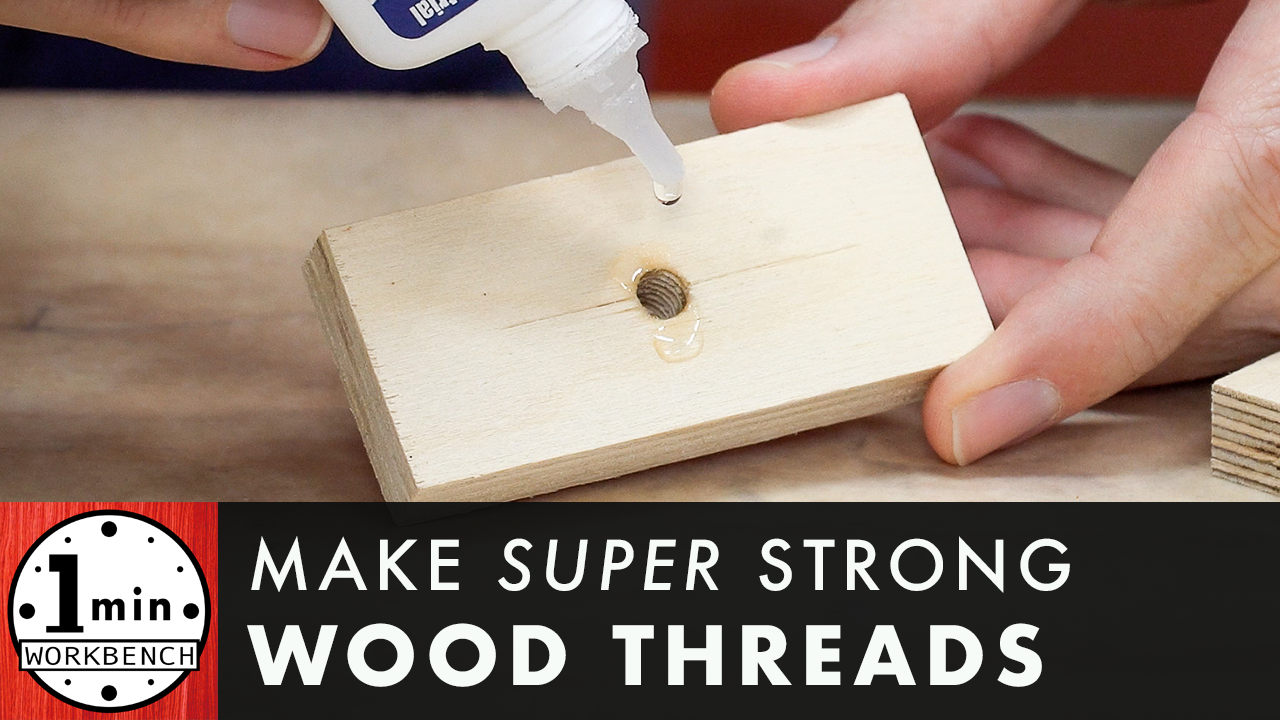 I use a lot of wooden threads with machine screws/bolts and have never had one fail. That said, people often suggest that I could improve the strength by soaking those threads in super glue. I didn’t really think it would make too much of a difference, but since the suggestions kept coming in, I decided to put it to the test.

Let me just answer this at the beginning and save you some time: It DOES make them stronger, and pretty significantly (about 1/3 stronger). Now, if you want to hear about my reasons for building the test the way I did, read on.

Since posting the video, a lot of people have suggested that I didn’t need to buy a 2nd scale to perform the test, and that I could have done it with leverage. The technique they’re suggesting is to place the jack on top of a scale, and position it far enough away from the joint that the force at the joint is greater (through the principles of physics), and the force at the jack/scale combo is lesser.

Let’s say we’re trying to break a joint, and let’s say for example the force required to break that joint when the jack is 1″ from the joint is X. Well, the force required to break the joint when the jack is 10″ from the joint would only be a fraction of X (using physics, we can see that fraction is 1/10 of X). Check out the image below, and then let’s imagine some things about the diagram. Imagine that the base of the lever is bolted to the ground, and imagine that the pivot point is actually a solid wooden joint. Let’s say the strength of the joint is such that if we put the jack 1″ from the joint, we’d have to apply 400 lbs of force in order to get it to break.

Now, if at 1″, X was equal to 400 lbs you wouldn’t be able to measure that with most bathroom scales because they simple don’t go that high. But remember, at 10″ from the joint, the force required would only be a fraction (1/10) of 400 lbs. That’s only 40 lbs, and can easily be measured with any regular old bathroom scale.

Now let’s reimagine the diagram above and consider that the pivot point actually is a free moving pivot point (a type of hinge, basically). That means you could set 400 lbs on that lever at 1″ from the pivot point and lift it up by using only 40lbs of force! That’s pretty amazing…you wouldn’t even need a jack to achieve this, you could do it by hand! Just think of all the things you could easily lift using a method similar to this.

There are a variety of ways these principles could be applied to the test I was doing in order to reduce the load required on the scale while still achieving the high forces required to break the threads. For example I could have the apparatus that was pushing up on the threaded test blocks (see video) sitting just 1″ from a pivot point on a lever designed exactly like the one shown in the diagram. That would easily break the threads, and never exceed the capacity of my bathroom scale.

The reason I decided against this method (as awesome as it is) is because I wanted to test the DIRECT pull strength of the threads, and that meant that the force had to be applied VERY directly. Any amount of off-angle force would allow for different types of forces (like shearing forces) to come into play, and those would skew the results. Now, a lever actually swings around a pivot point in the shape of an arc (see diagram below). That arc changes the “jack-to-pivot point” distance, AND the direction of the force being applied. This introduces a variety of problems and new variables, including those off-angle forces, which makes the lever method inappropriate for this test.

You could use a modified version of this lever idea that actually pulls up on the thread being tested, and includes a smaller secondary arm with another pivot point. That would sort of fix the “jack-to-pivot point” distance problem (it would actually just shift the variable distance issue to the new arm), and you still wouldn’t achieve the direct pull force required for a true thread strength pull test (see diagram below). As the arc of the main lever swung, the direction of the smaller secondary arm would not remain perpendicular. It would smoothly change several degrees as the action was performed, and the forces would be all over the road. The red arrows show how the direction of the force would change as the lever swings and the smaller arm shifts out of perpendicular.

So again, if you really want to test direct pull forces, you either need a simple test with greater force measuring capabilities (like the test I did), OR you need a test that’s more complex than I’m willing to describe here. All that aside, the new scale was cheap, and my old bathroom scale was due for an upgrade anyway, as you can clearly see in the video. 😂

I often find in these posts that I’m answering the most frequent “you shoulda done this instead…” comments from YouTube, and this one is no different. It just makes it easier the next time someone asks “why didn’t you just….?” in the comment section. I can then just post a link to this article instead of re-writing all the reasons in the comment section. 😉

People have also suggested that super glue will improve the durability of wooden threads, meaning that you’ll be able to screw and unscrew a bolt more times before the threads wear out. I suspect that is true as well, but I’m not going to test that one. I don’t want to build an apparatus that screws and unscrews bolts until failure, and I’m certainly not going to sit there and screw/unscrew them by hand. If you want to test that one, knock yourself out! 😂

Well, this was certainly the most work I’ve ever put into one of these posts…I hope you enjoyed it, or at least didn’t fall asleep while reading it!